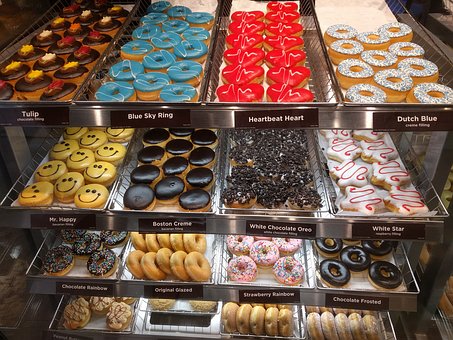 Eating fried dough as a treat has origins that date back to ancient Rome and Greece.  However, the dessert we call a “doughnut or donut” is credited to early Dutch settlers in America during the early 1800’s.

Doughnuts took on a patriotic resonance on the front lines in World War I, when female Salvation Army workers known as “Doughnut Girls” would fry and distribute doughnuts to American soldiers fighting in France. They offered a taste of home to the soldiers during World War II as well.

And National Donut day, is the on the first Friday of June, it succeeded the original event created by the Salvation Army in 1938, to honor the members who served doughnuts to soldiers during WWI. I wrote that day in my calendar!

But near and dear to my heart is the story of “Dunkin’Donuts” which began in 1948 in a restaurant called “Open Kettle” in Quincy, MA.  A Dunkin’ shop can be found literally all around the world.  We found one while on vacation in Nassau and Key West!

In the 1990’s,  my children would watch a show called “The Donut Man”. It was created

by American Christian children’s songwriter and performer Rob Evans. His overall theme is “Life without Jesus is like a donut – it’s like a hole in the middle of your heart”. He teaches through various bible and real life stories that God wants to fill that hole.

Life is full of good, even delicious, things. But there is also a brokenness or emptiness inside. The Bible shows us over and over that we have a need God for in our lives. We were created in His image for a relationship with Him. But since the Garden of Eden that relationship has been broken.

I once wrote a letter to one of my sister–in-laws who was in the midst of some major life- changing decisions.  In general it said, “You have tried many things in life. You tried education and got a Masters degree. You have bought property and are a landlord. You have many different friends and are now trying to have a family. (She is single and was considering adoption.)  All of these are great accomplishments but there will always be a void in your life without a relationship with God. We were born with a God sized vacuum in our hearts that only He can fill and nothing else will satisfy.

Jesus replied, “I am the bread of life. Whoever comes to me will never be hungry again. Whoever believes in me will never be thirsty.36 But you haven’t believed in me even though you have seen me.    John 6:35-36 (NLT)

My health may fail, and my spirit may grow weak, but God remains the strength of my heart; he is mine forever.    Psalms 73:26 (NLT)

I live with several chronic health issues and have faced many big “storms” in life. But God has always been there to give me strength, hope and a deep peace. I may feel sad or lonely but I am never alone.  That is why I chose Hebrews 6:19a for my ministry verse.

This hope is a strong and trustworthy anchor for our souls.

Friend, if you feel empty and weary today come to the Living Water that never runs dry. Only He can satisfy the longing of your heart.

Look at the birds of the air, that they do not sow, nor reap nor gather into barns, and yet the Father feeds them. Are you not worth much more than them?  Matthew 7:26